‘The Late Years’ includes 60 artworks from 1896—1926, and in particular focuses on his large-scale waterlily paintings, the diptychs and triptychs, full immersion.

I attended a preview last week, and had the great good fortune to be able to wander alone through the gallerie. I was quite overcome by the beauty, emotion, with incandescent light shimmering on ponds, the lilies levitating through the haze, and mist rising from the twilit ponds. Willow branches hovering, the imagery isobsessed with color and mood and feeling.

Highly recommended. The show is beautifully and artfully curated, and this is a once-in-a-lifetime chance to view Monet at the time of his great masterpieces.

Special thanks to Melissa Buron, curator the Fine Arts Museums of San Francisco. Her selection is breath-taking, and the presentation is exquisite. 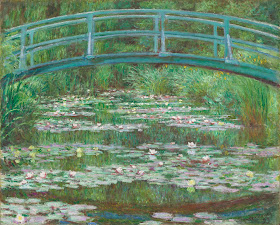 'Monet: The Late Years' explores the artist’s panoramas of gardens and ponds in Giverny as well as the late works that mark him as a forebear of modernism.

This is the first exhibition in North America in over 20 years dedicated to Monet’s radical late career. It features 60 paintings, with many on view in the United States or on the West Coast for the first time. Gallery walls were painted a soft sage leaf green/grey and a deep charcoal/aubergine/black color that present the paintings in a dramatic light. 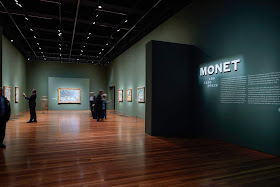 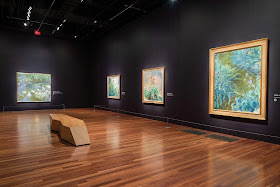 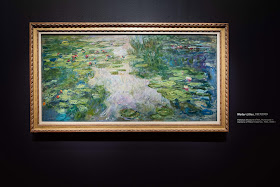 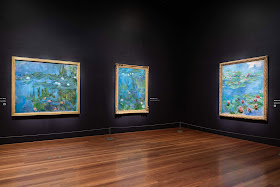 Collections of the show, which is co-presented by the Kimbell Museum of Art in Forth Worth and the Fine Arts Museum, are from the Musée Marmottan in Paris, the National Gallery in London, the Met, Fondation Beyeler, and from leading galleries in Chicago, Toledo, and the Legion of Honor in San Francisco. 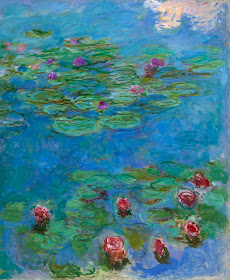 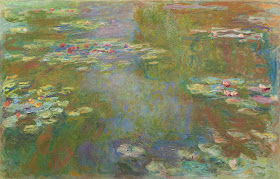 I love also Monet’s paintings of agapanthus in his garden, as well as highly abstract canvases of wisteria, elegant yellow lilies, and orange daylilies.

The texts that accompany the exhibit are excellent. I don’t usually focus or become distracted by the life of an artist or the times or the drama of his or her life or psychological state. But in the case of Monet, understanding of the works is enhanced by knowing the era, the times, his biography, his failing eyesight, and his grand donation (L'Orangerie/ Nymphéas) to France in honor of 1 million war dead.

In particular, the texts with the show relate that many of the paintings in this show were painted between 1914 and 1918 at the height of the First World War. Battles took place in the region west of Paris and gunfire could be heard in the distance from Giverny. His son was fighting at the front. His wife died. Cataracts clouded his vision. He continued painting these overpowering paintings. 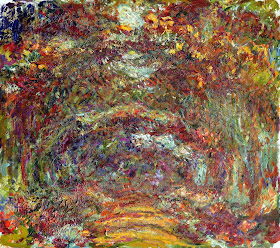 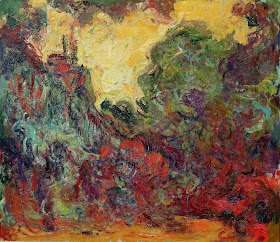 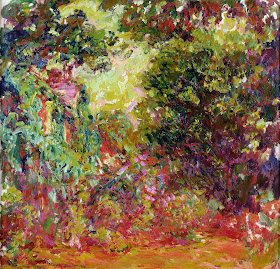 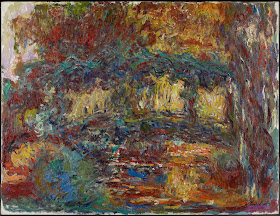 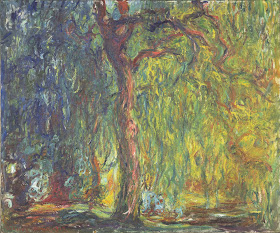 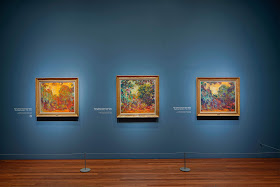 Eight gardeners tended the lily ponds. Several times a day they would push out into the water on pontoons ( as they do today) to clear weeds and nurture and protect the flowers.

Waterlilies dominated the last thirty years of Monet's life. He had a new gallery installed in his garden to work on the largest canvases.

"These landscapes of water and reflection have become an obsession for me," Monet wrote to a longtime friend in 1909. "It is beyond my strength as an old man, and yet I want to render what I feel."

Monet painted more than two hundred oils of the willows, trees, flowers and especially the waterlilies and the Japanese-style bridge and lagoons at Giverny. 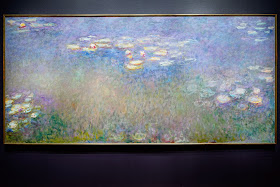 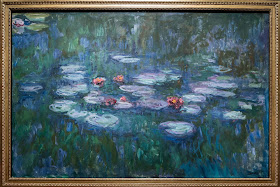 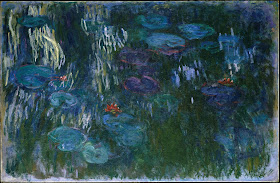 There is also a fully illustrated catalog for the exhibition: 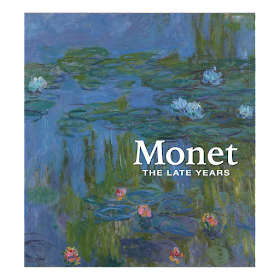 The de Young Museum in Golden Gate Park was designed by Hertzog & de Meuron and is clad in copper. The landscaping happens to include, co-incidentally, a waterlily pond. 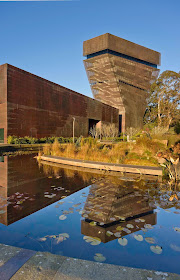 Monet: The Late Years at the de Young Museum, San Francisco, through May 27. www.deyoungmuseum.com

Photography, including images by Drew Altizer of the galleries and paintings, courtesy the Fine Arts Museums of San Francisco.