This Fall 2016 design book season has been so inspiring.

I’ve told you about my picks of the best and now I’ve discovered two more ‘must collect’ books for designers, architects, and lovers of décor and ideas and beauty.

Come with me to learn more details about these exciting new books.

The vivid and opinionated and lively 100 essays by America’s include fact-filled texts from established legends to members of the avant-garde and designers and architects working in many styles, in many regions.

Details include the process of design from fundamentals to accessories, paint and finishing touches.

Grouped by theme, the subjects range from practical considerations and details, to inspiration and style. Each contribution is paired with images of the designer’s work to illustrate the principles

In 352 pages, each with photography, are practical tips and thought-provoking design, traditional approaches and new ideas. 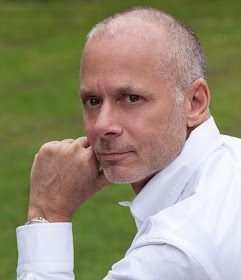 
Carl Dellatore began his career as a textile designer, and has worked with magazines, including House & Garden and House Beautiful. He is the author of The Fabric Style Book. He is currently working on a new design book.


“I went directly to the finest practitioners of the decorative arts in America — asking each to ‘teach’ me about a particular subject. What I discovered was the intellectual and sometimes philosophical roots of design — perhaps more in depth and revelatory than the practical application typically taught in a design school setting.” — Carl Dellatore

Exclusively for readers of THE STYLE SALONISTE, I asked the book’s editor, Carl Dellatore, to select ten quotes by leading designers from his book, ‘Interior Design Master Class’

David Easton — on ‘Evolution’
“Designers who do not heed society’s evolutionary changes will go the way of the dodo. In design, as in life, there is survival of the fittest; designers who can respond to contemporary clients’ demands are most likely to succeed.”


“...Electricity is exactly what successful juxtapositions produce. Whether furnishings are complementary or contrasting, their pairing generates a palpable current that evokes a desired feeling or ambience. In the same vein, rooms are called lifeless when poor juxtaposition either fails to generate a pulse or electrocutes with over enthusiasm.”


“Modernity and its manifestations in the physical world—what is considered “modern”— can be easily misunderstood. Modernity is not about minimalism or everything being white and reductive. When this happens—and the pendulum often swings in that direction— modernity falls into a style or, worse, a cult. It then has the potential to become tyrannical and intolerant, unaware of all the potent and fascinating forces in design that brought the modern world, as we think of it, into being.”


Alexa Hampton — on ‘Tradition’
“American design has always appealed to me especially, American that I am. It easily demonstrates its democratic openness to picking and choosing from among the many traditions available in the pursuit of a style, whether genetically connected to our past or not. Its very eclecticism illustrates our melting pot identity, just like everything else in America does, from our religions to our cuisines.”

Tom Scheerer — on ‘Luxury’
“Luxury properly starts with a fantasy. My own notion is clearly fixed in my mind; it doesn’t waver. It starts with a house high on a bluff in a car-free village looking westward over the sea. There are white walls, a stone terrace shaded by vines, and fruit trees. There’s a kitchen with a hearth for cooking over wood. In the bedroom, I sleep facing windows open to the salt air.

Now, truth be told, none of my clients would want a house that stark or primitive. But it helps to know my fantasy, because it informs all of the more finished or elaborate design solutions that I come up with for other people.”

Madeline Stuart — on ‘Trends’
“It’s only through the study of history, art, and the decorative arts that we can develop an understanding of how and why certain trends emerge and which ones will last. Interior design is a relatively new discipline, but there are numerous precedents that inform what constitutes timeless yet distinctive design.”


Victoria Hagan — on ‘Light’
“I have been quite lucky in my career to work with extraordinarily talented architects, and I’m sure they would all attest, much as I do, that light is neither traditional nor modern. It defies design categorization, yet it is transformative to every interior moment and transcends time and space. I see light as the only truly timeless element of design.”


“The expectation that indestructible materials are better, and therefore practical, has caused some to surround themselves with lifeless materials. This is a typical fear that seems quite ingrained in our society, one that has caused many to hesitate to use marble for a kitchen counter to avoid stains and scratches. I respond that only when the counter becomes worn and scratched will it truly be beautiful, as that home will then reflect that it is well loved and well lived in.”


“I am very prone to bold gestures, huge canvases, large overscaled antique pieces placed singularly on a wall, as the white space surrounding makes all of these objects far more outstanding. The punctuation of a burled-walnut or ebonized antique set against a white backdrop creates a natural landing spot for one’s eye at the end of a hallway for instance. These punctuation marks appear, when thoughtfully adapted to a space, much like the punctuation within the body of a sentence.”


“When I create rooms and houses, I sometimes know precisely where the spark comes from for a particular detail. Other times, though, I don’t, although it feels right. That’s the essence of design. What I am aware of, however, is that my choices come from a collective memory of things I’ve seen and places I’ve experienced in person. Whether at home or overseas, travel is my ultimate source of inspiration.”


“In the 2 ½ years it took to complete the book, I was exposed to the finest minds in design, an experience like none other in my life to date. What began as a humble quest for personal re-invention turned out to be an exemplary design education unlike any other. Interior decoration is an intellectual process, far greater than fabric shopping and specifying furnishings. I have a newfound respect for the design industry, and finally understand the value of great design. I am forever grateful to everyone who supported my efforts.”— Carl Dellatore 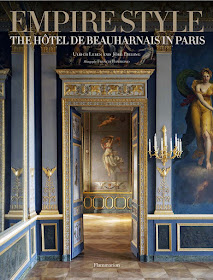 By Ulrich Leben and Jörg Ebeling


‘Empire Style: The Hôtel de Beauharnais in Paris’ — newly published by Flammarion — is one of the most beautifully printed and produced books this year. At 358 pages, it covers the restoration and refurbishment of one of the architectural treasures of Paris.

It’s not open to the public except by special arrangement…a museum group or architectural study tour, for example.

The photography by Francis Hammond is exquisite. Each detail of the restoration of this historic building reveals a masterwork.

It’s the official residence of the German ambassador to France, and located on the Left Bank near the Musée d’Orsay on rue de Lille. It was built in 1713.

The façade of the Hotel de Beauharnais (note that it is not a hotel, a French word used to denote a large residence) has a grand portal and ornate stonework, but it hardly reveals the grandeur and opulence of the rooms inside.

Come with me for a visit. 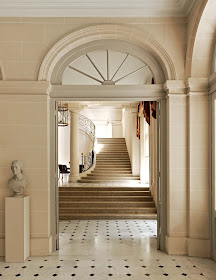 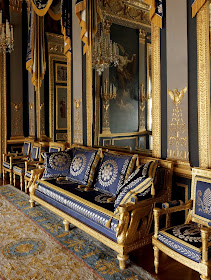 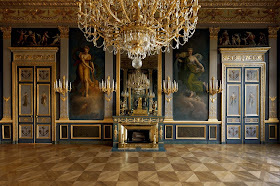 Constructed in 1713, the Hôtel de Beauharnais has occupied a central place in European art and design history. It was built by architect Germain Boffrand during the first wave of urbanization on Paris’s Left Bank.

In 1803, Josephine Bonaparte acquired the property for her son, Eugène de Beauharnais, and had the building extensively renovated.

At the fall of the Napoleonic Empire, the building was sold to the King of Prussia, becoming an embassy during the nineteenth century. Since then, the building’s unique Consulate and Empire décor has made it a spectacular example of Parisian interior architecture from the period. 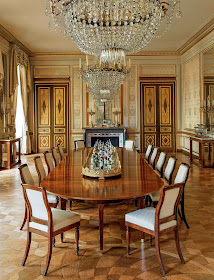 Edited by Ulrich Leben, a renowned art historian and the chief consultant for the restoration of the interiors and furnishings of the Beauharnais residence, and Jörn Ebeling, the Centre’s director of research, this meticulously researched book takes readers on a virtual tour through the Hotel’s opulent rooms, all vividly captured by Francis Hammond’s photography, commissioned specifically for this project. 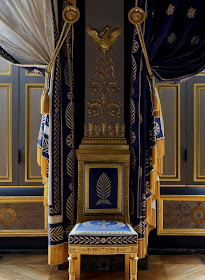 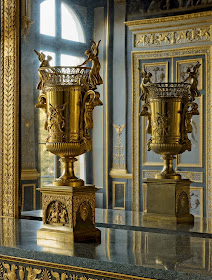