Enigma Variations: A New Rizzoli Design Book Is a Vivid Homage to Classical Architecture and a Desire to Live with Beauty and Grace Notes from Design History

I’ve written about Richard Shapiro many times — first in C magazine, for which I am an editor, and in extremely popular posts on THE STYLE SALONISTE.

In 2011 I wrote a very detailed post about Shapiro’s dramatic Malibu house, a chic reinvention of a beach shack. In 2014 I wrote about his Los Angeles house and garden, a lifetime project involving the re-invention and dramatic. His accomplishment is the metamorphosis of two properties, each dramatically different and equally challenging.

Congratulations to Richard for this beautiful new book. I wish him every success, happiness, and pleasure from each page. 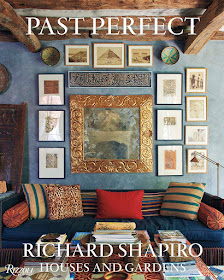 Rizzoli’s ‘Past Perfect’ is a tribute to Richard Shapiro’s extraordinary houses, his art collections, his antiques and photography, his design and style tips, and a Holmby Hills garden that was two decades in the cultivation.

I’m very happy to see Richard publishing his ideas. At the back of the book, his masterclass in design reveals an extremely interesting and original mind. 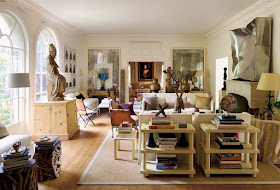 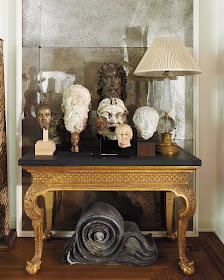 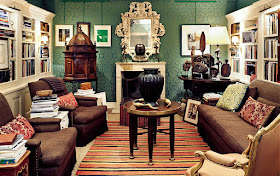 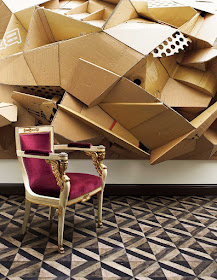 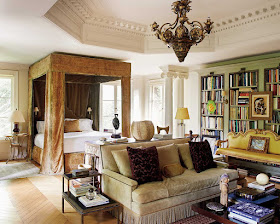 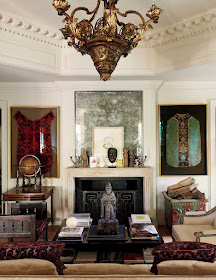 A Look Back on The Style Saloniste

I published two highly detailed blog posts, in 2011 and 2014, about the two Richard Shapiro residences and gardens. Let’s take a look at Lisa Romerein’s beautiful and sensual photography that accompanied my text. Let’s take another look at Richard Shapiro’s genius concepts and ideas and bold gestures. 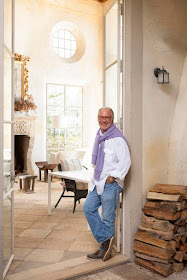 The photography, dreamy and elegant, was by Lisa Romerein. Shapiro turned a featureless property, in Malibu a derelict shack, into a retreat and escape from the mundane. It’s a masterful project, with his hand and eye on every inch. 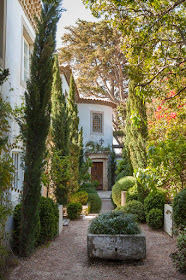 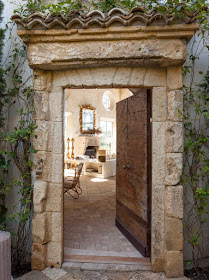 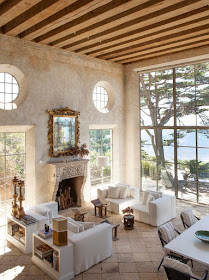 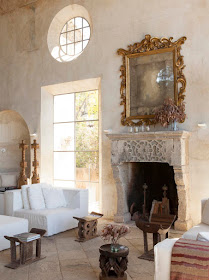 I visited Richard Shapiro’s California coast house on a bright day, with sun glinting off the Pacific Ocean. Once beyond the locked entrance gate, a romantic territory crafted over many years, is revealed.

“I originally planned it as a weekend house, and I’ve found I’m spending more and more time here,” said Shapiro. “Friends drive up from Los Angeles, we have drinks and watch the sunset, and enjoy dinner on the terrace with a big fire on cool evenings.”

The villa is so polished, so perfectly at home on its site, that it’s hard to imagine Shapiro’s property formerly included a tumbledown beach shack, roofless and windowless, in a tangle of vines.

“I loved the fact that I’d be starting from scratch, creating whatever I wanted,” said Shapiro. “Tall hedges and bougainvillea disguised the adjacent houses, so nothing would intrude on my concept.”

“This house is a folly, designed to look like an ancient building I discovered hidden beneath the undergrowth for centuries on this remote bluff, “ said Shapiro. “I planned the interiors to look old, too. I’ve always been attracted to antiquity, and want to live in another time.” 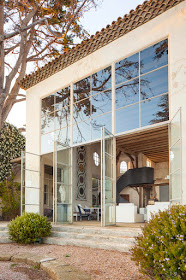 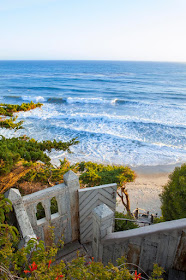 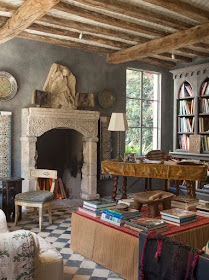 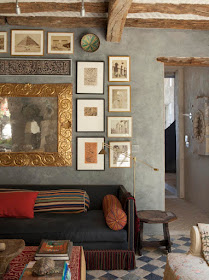 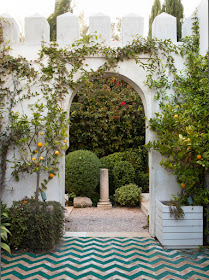 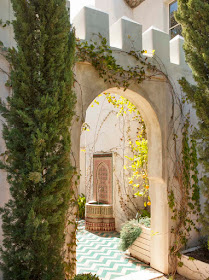 A look back: Richard Shapiro’s Los Angeles Garden on THE STYLE SALONISTE

In Holmby Hills he took a treeless tract of land and with skill created poetic and dramatic studios, a residence and dream gardens. Let’s take to this day exceptionally elegiac. 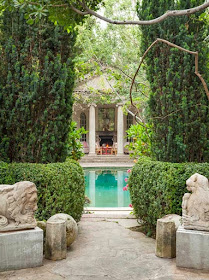 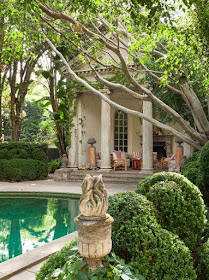 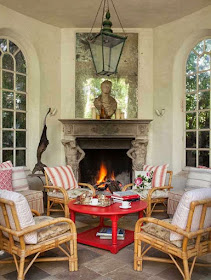 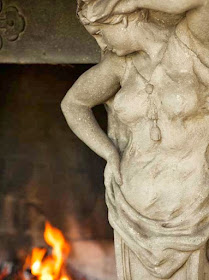 Richard has created for his pleasure an extraordinary private garden that surrounds his Hispano-Moorish residence on a quiet street in Holmby Hills.

Hidden behind walls of Boston ivy and a forest of timber bamboo, it is an utterly silent and tranquil domain, his escape from the world.

Shapiro’s garden is a dreamscape of sculptural clipped box. Meandering paths lead past a reflecting pool to hidden corners with dramatic steel sculptures. This verdant world—vivid green year-round—feels much larger than its half acre. Boundaries are blurred. Even his residence is entirely shrouded with overgrown vines and feels part of the garden.

“I view my personal garden as a vast canvas and the creative possibilities are limited only by my imagination,” said Shapiro, who works on the landscape every day, pruning and planting. “Rather than a garden, I think of it as a vast installation of land art.”

Overlooking the large pool and designed as the focal point of the garden, is a charming folly. This pool house was inspired by a Palladian villa, complete with a handsome antique stone fireplace, hand-carved columns, an antique mirror, and a large-scale lantern, all designed meticulously by Shapiro. It’s a chic stage set, and entirely convincing. 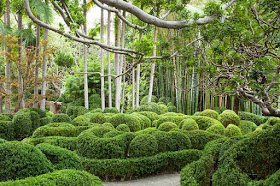 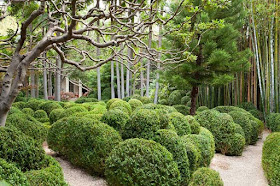 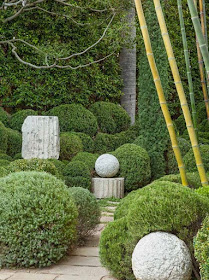 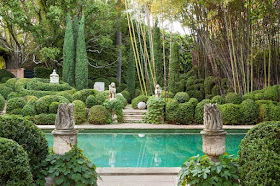 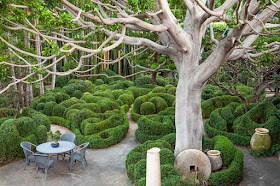 CREDITS:
All images from THE STYLE SALONISTE features on Richard Shapiro are by Lisa Romerein. www.lisaromerein.com.

Book cover and images from Past Perfect are courtesy Rizzoli, www.rizzoliusa.com 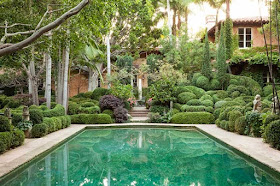 RICHARD SHAPIRO is a designer and antiquarian and the principal of his furnishings and design firm, Studiolo. He is also an active artist and collector.

MAYER RUS is a design writer, editor, and critic. He is currently the West Coast Editor of  Architectural Digest

MALLERY ROBERTS MORGAN is a writer, curator, and designer. She is the L.A. correspondent for Architectural Digest France and she has created residential interiors in London, Los Angeles, Paris, Mexico, and New York. 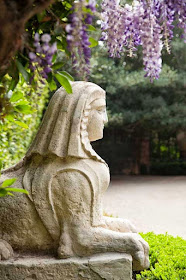