In a legendary Russian Hill penthouse, artist Susan Swartz has created a tranquil setting for painting and working on multiple philanthropic projects. Her paintings are a celebration of the natural world.

Susan’s studio setting is in an historic Russian Hill penthouse—originally the colorful residence of the great explorer and aesthete Templeton Crocker. It was, notably, decorated by Jean-Michel Frank and is featured on archival books of Frank’s work.

Come with me to meet Susan and view her newest paintings—and to enjoy a rare encounter with an historical seldom-seen residence in San Francisco.


From the moment artist Susan Swartz first walked into the light-filled penthouse in an historic building on Russian Hill, she knew it would be a tranquil setting for working on her dramatic abstract paintings.


“It’s very peaceful and quiet up here—and the light is spectacular, life-enhancing,” said Swartz, internationally recognized for her exuberant canvases that capture her intense belief in the healing power of the natural world. Her art and a long roster of global environmental and social causes are her main focus. She paints every day, often for seven or eight hours. 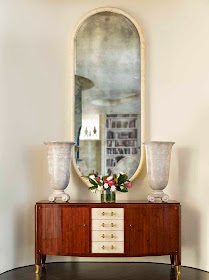 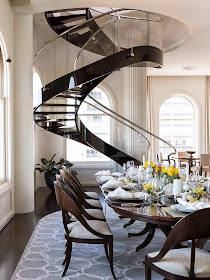 The penthouse has nurtured her creativity. Swartz’s paintings, barely dry, are shipped to top collectors and galleries around the world. In the summer (see details below) she’ll be showing at an historic gallery in Koblenz, Germany. She is represented by the prestigious Belgravia Gallery, London. 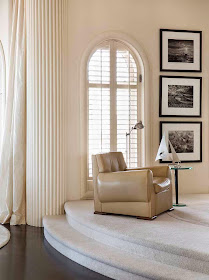 “I love the freedom and intensity of painting landscapes and pure abstraction,” said Swartz. “Nature is my healer, my inspiration. The San Francisco panorama spurs me on.”

As she paints, Swartz is also surrounded by the resonant design history of her penthouse atop one the most elegant twenties buildings in the city. Covering two levels, with rooftop terraces, it was once the languorous realm of scientific explorer and art collector Templeton Crocker, the stylish scion of a Big Four family. 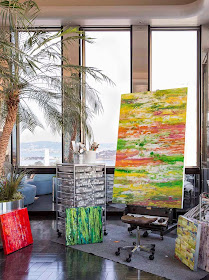 Designers have long revered the penthouse with its bachelor’s dream retreat planned in 1928 by legendary French interior designer Jean-Michel Frank. Black and white images from the era show sleek parchment-paneled walls, intricate straw-marquetry cabinets, obsidian lamps, and avant-garde shagreen tables, all crafted and assembled in Paris and shipped to San Francisco. In 1929 French Vogue called it ‘the first genuinely modern interior in the United States’. 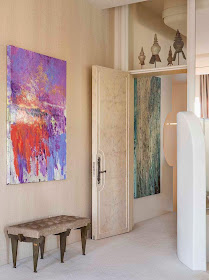 When Swartz moved in, the luxurious Frank interiors had long ago been dispersed. All that remained were the bold mirrored pilasters in the sunroom, and a quirky Henri Laurens Cubist-style metal banister on a service stairway.

“I worked to protect the integrity of the architecture, in homage to Jean-Michel Frank,” said the classically trained artist. Like Frank, she shaped interiors in pale neutral tones, calm and elegant, that are in harmony with the sunstruck views.


“Nature is my inspiration, and my message is that it’s fragile and we must protect it,” said Swartz. “That belief gives days in my studio a certain urgency. I’m driven to paint. I can’t hesitate. This is my life’s work.” 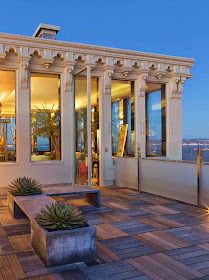 A Personal Path
exhibiting at the Ludwig Museum, Koblenz

The Ludwig Museum was founded in 1992 and its permanent collection was assembled by the well-known collectors Peter and Irene Ludwig. The collection is mainly post-1945 German and French art with well-known artists represented such as Pablo Picasso, Jean Dubuffet and American artists, Jasper Johns, Willem de Kooning and Robert Rauschenberg.

She is inspired by the intersection of art, nature, and spirituality. Swartz’s distinctive style has been recognized with solo exhibitions at the Kollegienkirche in Salzburg, Austria in 2014; the National Museum of Women in the Arts in Washington, D.C. in 2011; the Springville Museum of Art in Springville, Utah in 2010; and the Utah Museum of Fine Arts in Salt Lake City, Utah in 2008.

Her works are in the permanent collections of the National Museum of Women in the Arts; the Springville Museum of Art; the Utah Museum of Fine Arts; and the International Olympic Museum in Lausanne, Switzerland.

The same year she was honored by the Harvard Divinity School for a career that continues to blend artistry and faith.

In 2008, she was honored with the Independent Publisher Book Award for her book Natural Revelations.

The underlying energy and tension in Swartz’s work hints of her complex relationship with the natural world. She now works from a place of impassioned reverence for the earth, and of fierce determination to inform and educate.

As Swartz’s relationship with nature has evolved, her painting has progressed from a realist style to an abstract style.

A Personal Path
Swartz’s solo exhibition at the Ludwig Museum, Koblenz, displays more than 70 worksof art revealing the depth of her work and the evolution of her abstract paintings.

Thank you, Lisa Romerein, for a fantastic photo shoot.

The Triumph of Grace and Beauty

This week I’m celebrating San Francisco Ballet with Memories of a Superb 2015 Season. And Looking Forward to the 2016 season, just announced.

Come with me or an illustrated preview, including announcements of bold new works, and revivals of classical ballets of the past. It’s tutu fabulous.


With the Sunday May 10 performance of ‘Romeo & Juliet’, San Francisco Ballet’s triumphant 2015 season drew to an ecstatic and applause-filled close.

The eight programs of the 2015 season ranged from the dramatic and highly original ‘Raku’ , to the haunting ‘Giselle’, the witty and colorful ‘Don Quixote’ and an emotionally-charged ‘Shostakovich Trilogy’.

San Francisco Ballet is one of the leading ballet companies in the world— recent recognition in Paris proved it. And the scope and grace and elegance of recent new productions offered further illustration of its quality and high standards.

Yes, there’s a certain hometown pride in my admiration. Since I was a young ballet student in New Zealand, and attending international ballet performances with my parents, I’ve been an avid follower of ballet. I’ve devoted seasons to ballet immersion in London and Paris. (Binge-watching before there was binge-watching.)


High praise must go to artistic director and principal choreographer Helgi Tomasson, now dancing into his 31st season, as well as the company’s exceptionally talented ballet masters, instructors and choreographers and the musical director and conductor, Martin West.

Dancers this year were technically exquisite. There was a perfection that made my eyes water, my breath pause.

On stage this year there was precision in the corps dancing--and as individuals personal style and individual feeling shone through. But there was also the frisson of spontaneous expression. I loved their refined and graceful communication to the audience.

I applaud them all—and cannot wait for next January when the golden silk damask curtains of the San Francisco War Memorial Opera House rise and the next season opens.

Come with me for a detailed preview of the coming repertory season—which includes ballets like ‘Swimmer’ introduced this year, and classics like ‘Onegin’ that I’m impatient to see once more.

Season highlights of San Francisco Ballet’s next repertoire include the North American premiere of Forsythe’s ‘Pas/Parts’ and new works by Peck and Scarlett plus works by Balanchine, Cranko, Morris, Possokhov, Ratmansky, Robbins, Tomasson and Wheeldon

The 2016 Season will begin with Nutcracker, which runs December 16-31 for a total of 29 performances. Following the Opening Night Gala on Thursday, January 21, 2016, the season will consist of eight programs, from January 24 to May 8.

“This season is particularly exciting because of the incredible diversity of choreographers represented,” said SF Ballet artistic director and principal choreographer Helgi Tomasson. “In addition to legendary choreographers such as George Balanchine and Jerome Robbins, I’ve programmed works by some of the most exciting contemporary choreographers working today, including Mark Morris, Alexei Ratmansky, and Christopher Wheeldon—we’re lucky to have such a long and rich history with each of them.”

Program 3 opens on Friday, February 19 with Helgi Tomasson’s full-length Swan Lake. Tomasson choreographed his first production of Swan Lake for SF Ballet in 1988 and in 2009, he created a new version, featuring scenery and costume design by Jonathan Fensom; lighting design by Jennifer Tipton; projection and video design by Sven Ortel; and hair, wig, and makeup design by Michael Ward.


Program 4 opens on Tuesday, March 8 with George Balanchine’s Coppélia. The popular comedic ballet, set to a score by Léo Delibes, was first performed by the Paris Opéra Ballet in 1870.

Program 5 opens on Wednesday, March 16 with Jerome Robbins’ Dances at a Gathering and Yuri Possokhov’s Swimmer. Dances at a Gathering, set to music by Frédéric Chopin, is widely considered a masterpiece. Created in 1969 for New York City Ballet, the hour-long work, set to 18 piano pieces, features ten dancers.

Program 7 opens Thursday, April 7 with Mark Morris’ Drink to Me Only With Thine Eyes, a world premiere by Justin Peck, and George Balanchine’s Theme and Variations. Morris’ Drink to Me… was premiered in 1988 by American Ballet Theatre. The work for 12 dancers is set to music by Virgil Thomson, with costume design by Santo Loquasto and lighting design by Michael Chybowski.

Program 8 opens Saturday, April 30 and features the return of John Cranko’s Onegin. Last performed by SF Ballet in 2013, this romantic full-length production is based on Alexander Pushkin’s novel in verse Eugene Onegin, set to a score by Peter Ilyich Tchaikovsky and orchestrated by Kurt-Heinz Stolze. The ballet features scenic and costume design by award-winning designer Santo Loquasto, with lighting design by James F. Ingalls, and was first performed by Stuttgart Ballet in 1965.

“Meet the Artist” Interviews and “Pointes of View” Lecture Series

SF Ballet will continue to present the entertaining and informative “Meet the Artist” series at Friday evening and Sunday Matinee performances. The 30-minute interviews with Company artists, management, and guests of SF Ballet begin one hour prior to performance; all ticket holders are invited to attend free of charge. In addition, SF Ballet will present “Pointes of View” lectures on Wednesdays during the season, which are free and open to the public. For more information, visit www.sfballet.org.

As America’s oldest professional ballet company, San Francisco Ballet has enjoyed a long and rich tradition of artistic “firsts” since its founding in 1933, including performing the first American productions of Swan Lake and Nutcracker, as well as the first 20th-century American Coppélia.

San Francisco Ballet is one of the three largest ballet companies in the United States. Guided in its early years by American dance pioneers and brothers Lew, William and Harold Christensen, San Francisco Ballet currently presents more than 100 performances annually, both locally and internationally. Under the direction of Helgi Tomasson, the Company has achieved an international reputation as one of the preeminent ballet companies in the world.

In July 2014, the Company toured to Paris as part of Les Etés de la Danse Festival, marking the 10th anniversary of its inaugural engagement with the festival. At Théâtre du Châtelet, SF Ballet presented over 20 works by 15 choreographers over a gala evening and 17 performances. 2016 marks the 31st anniversary of Helgi Tomasson’s tenure as artistic director of San Francisco Ballet.

For more information and for tickets: www.sfballet.org