The shock of the hue, industrial elegance, and a dash of daring

Come with me for a visit.

“I always say if everyone loves my décor, it is probably boring, and I haven't done a very good job.”—Ken Fulk 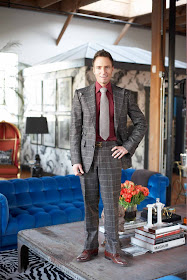 “Consistency is the last refuge of the unimaginative” states the Oscar Wilde quote adorning the front window of Ken Fulk’s South of Market design studio and loft. The quip tells everything you need to know before heading upstairs to meet the witty and design-fearless Fulk, who is currently one of the brightest sparks in San Francisco’s design arena.

“I will never be accused of being boring,” said Fulk, originally from Jefferson country in Virginia. “Design should inspire and make you smile. And it should never be a bore.” 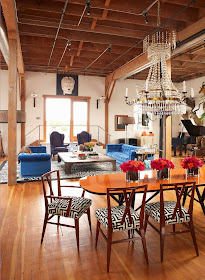 He founded Ken Fulk Design twelve years ago, after testing the waters by designing for handpicked clients. Fulk by-passed design school and a classic apprenticeship with a design firm. He has always stayed under the radar, taking on new clients by referral only. His 20-person firm is currently working on projects from Aspen to Provincetown and from Pacific Heights, to the Dordogne in South-west France.

“My biggest complaint about most rooms I see is that they look too 'decorator-y', said the designer. “I tend to shy away from most things 'designer'. I find it to be chatter that might cloud my instincts. I always want to mix things up and relish the imperfection. Even impromptu has to feel definitive. It sounds easy, but it's not.”


“I always want to mix things up. I relish imperfection.”—Ken Fulk 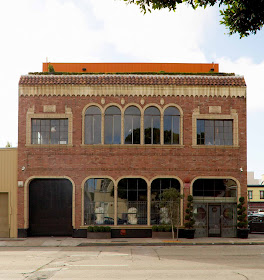 Take a right turn on a deserted street in a hidden corner of SoMa, and the handsome brick building that houses Ken Fulk’s design studio and loft hovers into view. With its grand arched windows, sculpted escutcheons, and elegant demeanor, the four-story edifice is more Grand Canal than industrial warehouse. It was this Quattrocento-style fantasy that inspired Fulk to acquire the building five years ago.

“I always wanted to live above the shop, though this loft is admittedly a bit more Bruce Wayne than corner grocer,” Fulk said. The warehouse includes his loft and a roof deck on the top floor, and Fulk’s design studio on the third floor. On the first two levels he warehouses an ever-expanding inventory of furniture and accessories he uses in design projects.

The building, built in the 1920's, has a Moorish/Venetian exterior but the interior when Fulk acquired it was pure warehouse, with brick walls and worn fir floors.

“From the moment I walked in the door, I knew I was going to buy the building,” said Fulk. “I saw the old spiral staircase and the soaring 16-foot ceilings, and there was no turning back. I left the meeting and wrote an offer. Three weeks later I owned it.” 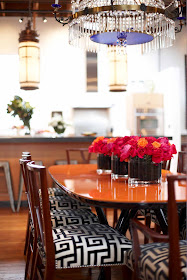 Fulk shares the loft with his partner of 20 years, Kurt Wootton, an accomplished pianist.

When they purchased the building, the interior brick walls had been sandblasted, most interior walls removed, and the old fir floors sanded.

“Basically it was a perfect shell. It took on an almost spiritual quality. It was this purity that moved me,” said the designer. “My motto in undertaking the project was 'don't screw it up'. I did not want to lose the feeling and character that so moved me about the space.”


Fulk and his team added all-new systems to the entire 14,000 sq. ft of the building, new plumbing, electric, HVAC but keeping them simple and industrial in appearance and leaving most systems exposed.

“For the loft I wanted to resist the trend to condo-ize the space by cutting it up into a traditional series of rooms,” said Fulk. “ I literally banished walls and doors with few exceptions.”


Fulk, a passionate and knowledgeable collector, had only to take a trip to Paris to check in with his favorite French antiques dealer, Stephane Olivier to find an 18th century portrait of a dandy for the bathroom, a 10-foot square industrial steel table for the living room, as well as gilded chairs and a series of vitrines for the bedroom and dressing room.

“I wanted the space to function as a huge grand salon with quiet moments throughout,” said Fulk “Despite my love of color I resisted the urge and kept all of the walls white.” 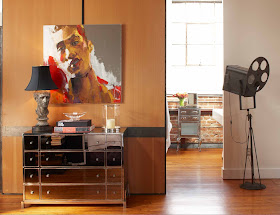 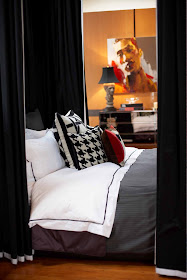 “I have always felt very self-confident about design, “ said Fulk. “I was never afraid to learn, but afraid to be taught in a conventional sense. I feared I might lose something in the translation. Like a singer afraid to take voice lessons, I was scared that an innate gift might be lost.”

So he toys with scale. His 15-foot tall draped four-posted bed towering over the dressing room and adjacent bathroom, and an Hermes-orange dining table shimmering beside the industrial marble-topped counter in the kitchen.

To avoid other walls he designed the headboard of the bed to obscure the closets hidden on the other side. The shower floats in the space and encloses the bathroom.

“I take things of great disparity—spaces, furnishings, art, accessories—and find a way for them to live in harmony or at least live together in an off-hand way,” said the designer. 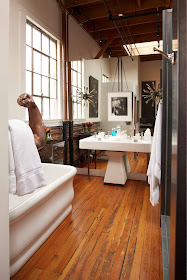 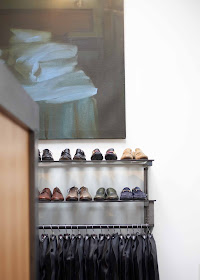 With bare windows on four sides of the loft—and the gilded dome of a Ukrainian Orthodox church looming outside the living room—the loft is consistently engaging.

He experiences the full spectrum of the day, with sunrise over the city; sunset behind Twin Peaks, and all-day light playing off the spectral Federal Building just blocks away.

“With all of the skylights we are never in the dark,” said Fulk, still entranced. “The full moon traces it's way across the room, so bright I can almost read in bed by it. Waking up just as the sun is about to rise is magical. The space is cathedral like at that moment. In the meantime, his design studio is becoming the think tank he hoped for.

“I work with incredibly talented people who challenge and support one another to do better and better work,” said Fulk. 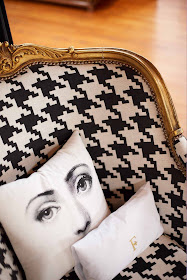 And the loft has become the grand salon he hoped for. He and his team have countless dinners, fund-raisers, birthday parties, a masked ball or two, a dinner for Jean-Paul Gaultier, piano recitals, movie nights and even more fundraisers.

“Now I am essentially looking for any excuse to throw a party.”


FULK’S FOLLY
“I needed some way to shut the living space off from the studio down below connected by the industrial steel spiral staircase. My first instinct was a glass-walled enclosure, a sort of poor man's Louvre entrance. However that turned out to be a rich man's concept. Instead I settled for a floating library. Essentially it is a sky lit conservatory at the top of the stairs. It is an ideal spot to house my growing book and sculpture collection. The steel and glass doors to the library were salvaged from the Napa State Mental Hospital.” 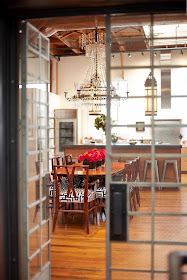 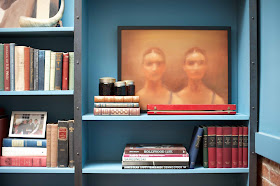 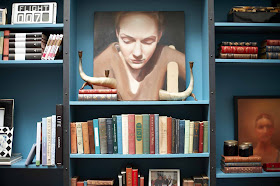 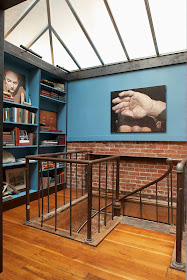 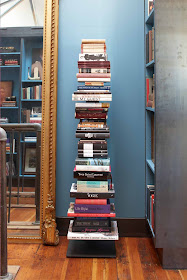 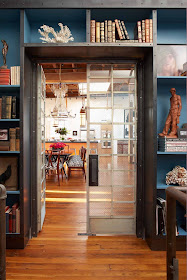 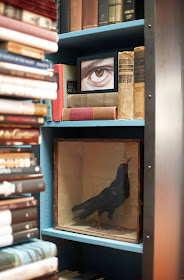 “Illusion is the first of all pleasures.” –Oscar Wilde

Philip Harvey’s work was also recently featured in my profiles on designer David Oldroyd, as well as the feature on Darin Geise/ Coup d’Etat, San Francisco (both in THE STYLE SALONISTE archive).

Phil specializes in interiors, life-style and product photography, and is technically first-class and he’s extremely pleasant and congenial to work with. Highly recommended.