For Sale: The Most Beautiful House in San Francisco

It has been whispered that Larry Ellison, Oracle founder, made an offer that was not refused.
We hear $40 million. That's a lot of hardware, and software. Pre-emptive strike?
Broadway is buzzing with gossip. We stay away from hornets' nests.
Now it’s whispered that Larry did not buy it — and that the asking price might be $45 million, or is it $25 million?
San Francisco Realtor Malin Giddings, so professional and so very discreet and elegant, is not talking.
If you have a spare $45 million and would love to move to the best location in San Francisco (adjacent to Larry Ellison, as it happens, and with the best view of yachts on the bay)...check in with her at www.sfproperties.com.
Though the Rosekrans house is not strictly listed yet, it has created lots of interest and hardly a moment goes past without someone telling me 'Mr.Gotrocks has made an offer' or 'Miss Heiresstobillions is desperate to get it' or 'Mrs Sochicithurts is on the prowl'.
In one ear and out the other!


Let’s take one last look at Dodie’s Spanish-inspired house, once the residence of the Archbishop of San Francisco. Oh, the stories these walls could tell.
Now the major paintings have been sold at Sotheby’s. The Picasso above the mantel went for $12 million, it seems. And the jewelry and furniture and antiques will be sold at Sotheby’s later this year.
Let’s enjoy these beautiful lost interiors one last time.
On opening nights at the San Francisco Museum of Modern Art, at diamond-dazzled Paris Opera galas, masked balls in Venice, or the big bash to honor Yves Saint Laurent at the de Young Museum in San Francisco, there was one exotic and glamorous woman who was always the center of attention. 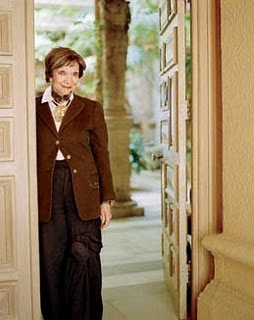 Dodie used to divide her year, carefully following the art, social and fashion calendars, between her mansion in San Francisco (fall and Christmas), her chic jewel-like apartment in Paris, (spring), and her theatrical grand palazzo in Venice (summer until early September when she watched the Venice Regatta from her Grand Canal palazzo balcony).

She was born in San Francisco and attended a private girls’ school in Pacific Heights.

“I didn’t set out to be original. I wear what appeals to me. It happens that many of the fashion designers, like Galliano and Gaultier, are friends of mine and I like to celebrate their joyful work and enjoy sense of style,” Rosekrans told me.

Her closets and crammed attic were filled with decades of couture gowns, resplendent kaftans, shimmering embroidered jackets and fur coats, any of which could hold pride of place in a museum costume collections. Now many museum curators have snapped up her best ensembles, so eventually we will see the Gaultiers and early Gallianos and her Thea Porter gowns and early Versace and Kaisik Wong’s dramatic one-of-a-kind jackets. Swoon!

The ardent fashion aficionado was also a generous, life-long, arts supporter, benefiting the Fine Arts Museums of San Francisco, Save Venice (savevenice.org), as well as arts organizations and cultural activities around the world.

Dodie grew up in San Francisco in the twenties and thirites. She enjoyed a gilded family life in Pacific Heights, just a hop and a skip from her present residence. Her father, Michael A. Naify, and his brother, originally from Lebanon, built a theater chain at a time when cinemas in California were palatial. It was later sold to United Artists. 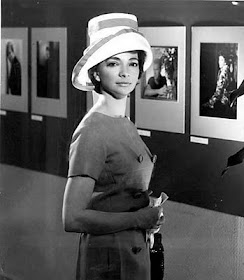 Dodie’s Francophile mother traveled to the Paris couture. Her young daughter was obsessed with art, fashion, style, creativity and fine craftsmanship as a teenager and sought out galleries and artists.

Dodie, like many young California girls of that time,was sent to finishing school in Switzerland. “They taught comportment for young ladies, how to hold a knife and good manners, but I would not call it an education,” recalls Dodie. “In those days, girls didn’t work, so that eliminated a whole world of interesting things I would have loved to explore.”

She soon set out to correct that, studying art, visiting museums and making a point of meeting leading artists of the day.

Rosekrans, a lifelong autodidact, would eventually become a patron of young artists and university art programs, and was an honorary trustee for the prestigious Centre Pompidou Foundation in Paris, among many other posts. Her collections were scattered at her residences in Paris, Venice, Runnymede Farm in Woodside and San Francisco. Her taste is for quality and runs from Picasso and Parmigianino to Egon Schiele. 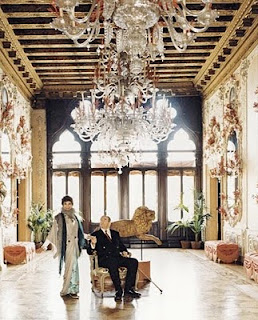 This was a woman who could admire and appreciate gritty guillotines-as-art—and she displayed it in the opulence of her gilded and antique-filled 18th century Venetian palazzo, which was decorated by Tony Duquette and Hutton Wilkinson.

John Rosekrans made another fortune as a business partner with his boyhood friend, John Bowes, marketing iconic sporting products including the Morey Boogie Board, Frisbee and Hula Hoop.

It was Rosekrans who encouraged his wife to buy couture, and their photo albums from the ‘60s and ‘70s are chock-a-block with party pictures of Dodie in Paris, wearing Balenciaga and Givenchy, and in San Francisco in Dior and Yves Saint Laurent in diamond parures and over-the-top strings of baroque pearls, emeralds and rubies. But here, too, Rosekrans showed her rebellious streak by also wearing African tribal jewelry, chunky antique Tibetan coral and turquoise necklaces, along with dramatically overscale Tony Duquette necklaces, strands of baroque Tahitian pearls the size of golf balls, along with walnut-sized emeralds and rubies like those in the treasure troves of the great Nawabs and Maharajahs of India. Sometimes, ornately dressed for a ball, she appeared to be wearing them all at once—a thrilling sight.

“I never set out to be dramatic,” said Rosekrans. “I look through my closets and jewelry cases and wear what appeals to me that day.’ 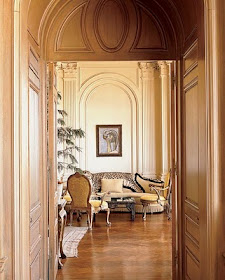 In 1979, the Rosekranses acquired one of the most beautiful residences in San Francisco. Built in 1916 by architect Willis Polk, its atrium, with ornate stonework and columns, was copied from a Spanish Renaissance palace, the Casa de Zaporta in Saragossa. The couple hired San Francisco designer Michael Taylor to design the interiors.

Taylor created one of his most elegant and enduring interiors in California, with elaborate pilaster walls painted a soft gray, s parquet floors stained dark walnut. Taylor brought in eight bold and gutsy gilded Georgian chairs, a towering 12-panel Chinese Coromandel screen, and a pair of curvy sofas in a style favored by Elsa Schiaparelli.

“I have not changed a thing since Michael completed it,” recalled Rosekrans, dressed in Yamamoto, reclining in her study on an 18th century gilded French chaise longue. “He was a genius. I would not dream of altering his design. I’m very happy here.”

Rosekrans had a life-long love affair with art, and she enjoyed contemporary paintings and sculpture in her historic residence in San Francisco, in her Paris apartment, and the Venice palazzo. All of the carved stone fireplaces, moldings and architecture are original to the 1916 residence.

It is said that when the original Spanish Renaissance palace that inspired the Rosekrans house was damaged in the Spanish Civil War, envoys came to San Francisco to study it and restore the palace precisely. Fantail palms were a Michael Taylor favorite. 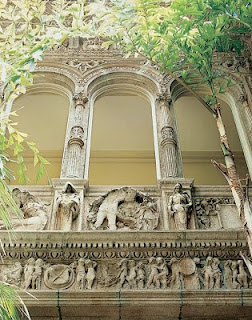 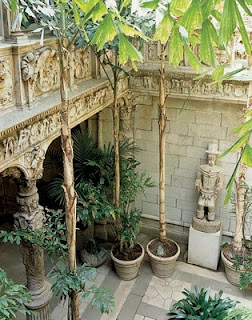 Credits:
All images of the Rosekrans residence here by Lisa Romerein, used with express permission.