Welcome to my beloved friends and followers — THE STYLE SALONISTE is back!

After a pause, I have returned with cultural news, books, travel, events, and all my favorite places and people to reveal to you.

You will be happy to hear that art director, Brian Dittmar, and I are once more working together to bring THE STYLE SALONISTE to you. Brian was the founding art director and he creates the beautiful layouts. He is also the owner/ founder of a marvelous new gallery and retail boutique, Maker + Muse, in Maplewood, New Jersey. Meet him there.
I’m happy that you all have followed me over to Instagram — @dianedorranssaeks and #mylifetimelibrary. I post my adventures and travels, new books, and flowers and style and especially luxury interiors and great interior designers.
This week, I‘m delighted with the news that in San Francisco, our cultural life is returning with the opening of San Francisco Opera and a magnificent and bold fall season.

Check below for everything you need to know, including the requirement for proof of vaccination. All tickets must be pre-booked. New seating. New strict health protocols.

Tosca, long associated with significant moments in San Francisco Opera’s history, will be the first opera staged in the War Memorial Opera House since the pandemic shutdown.

The Company’s “colorful and lavish” (San Francisco Examiner) production, first unveiled in 2018, is by director Shawna Lucey with sets and costumes designed by Robert Innes Hopkins and lighting by Michael Clark.

I have admired Matthew Shilvock since he first arrived at San Francisco Opera, and especially after his appointment as General Director.

He has deftly directed the company through several challenging years. I especially have been impressed with his demeanor and management as the company has traversed the Covid year, and now emergence.

I also admire and appreciate that Matthew is passionate about telling profound stories of humanity through the total art-form of opera, connecting audiences with the emotional core of the repertoire, and empowering the whole Company.

Now in his sixth season as General Director, Matthew has overseen a major restructure of the senior management team, and the inception of an endowment campaign in support of the Company’s second century. He initiated the production of two world premiere operas: John Adams’ Girls of the Golden West and Bright Sheng’s Dream of the Red Chamber, and the development of a number of programs aimed at highlighting the talents of the Company, including annual concerts of the Opera Chorus and a new side-by-side orchestra program with San Francisco Unified School District schools.

His priorities include replenishing the core repertory productions of San Francisco Opera, creating a dynamic audience experience and community pride, connecting the Company to the fast-growing swirl of new thinking and new technologies in the Bay Area, and developing a stable financial model for large-scale repertory opera in the 21st century.

“Opera gives us opportunities to gather and share in deep, collective, emotional expression. I have never felt more urgently the need for us to gather in this way. We need to be together again, and, on August 21, we will raise the curtain and do just that. But we are not returning unchanged. We emerge with a new music director in Eun Sun Kim!”

“We emerge informed by the bold experiments of the last year, carrying them forward with our new livestreaming program. And we emerge with an even deeper understanding of the power of opera to connect us after the long winter of its absence.”

“That all of our productions this season will be new or recently new to our stage is a testament to the local artisans who built them and to the local community which has supported this Company so magnificently during this year.” — Matthew Shilvock

The Fall 2021 Season continues with Beethoven’s Fidelio in director Matthew Ozawa’s new production, which updates the opera’s setting from an eighteenth-century prison to a modern government detainment center.

For this highly anticipated production of Beethoven’s only opera, Eun Sun Kim conducts the San Francisco Opera Orchestra, Chorus, and a cast headed by Elza van den Heever as Leonore in her long-awaited return to the Company since her debut on the War Memorial stage as Donna Anna in Mozart’s Don Giovanni while still an Adler Fellow.

San Francisco Opera continues its multi-year project of staging the three operatic collaborations of composer Wolfgang Amadeus Mozart and librettist Lorenzo Da Ponte as a trilogy of works set in an American house across a 300-year timespan.

The Mozart- Da Ponte Trilogy, which launched in 2019 with the acclaimed production of The Marriage of Figaro (Le Nozze di Figaro) set during colonial times, receives its second installment this November with Così fan tutte. The production takes place in the 1930s with the house now converted into a country club and the characters at a crossroads as trouble begins to stir abroad. 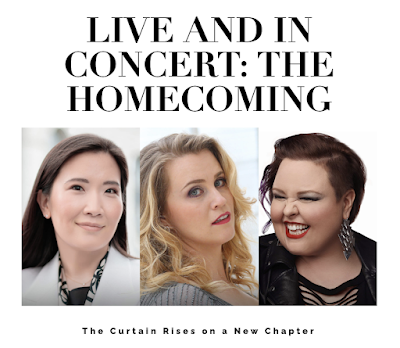 Celebrate the start of a new era for San Francisco Opera with a one-night-only concert event featuring three of today’s greatest opera stars followed by a complimentary sparkling wine toast in the lobby.
For the first time since 2019’s acclaimed Rusalka, soprano Rachel Willis-Sørensen, mezzo-soprano Jamie Barton, and Music Director Eun Sun Kim join together with the San Francisco Opera Orchestra in an evening of music and glamour, celebrating the return of live opera to the War Memorial Opera House stage.
Don’t miss this unforgettable tribute to the power of the human voice.
Tickets are available for purchase here.
* * *
Besides tickets to the concert itself, patrons can purchase tickets to:
The Homecoming Celebration (pre-curtain reception, concert intermission reception + dinner; concert tickets sold separately)
The Homecoming Supper (concert intermission reception + dinner; concert tickets sold separately)
The Homecoming Cookout (private luxury suite at Oracle Park for the simulcast of the concert, includes parking and catering)
Details about the special packages can be found here.
* * *

Welcoming Audiences Back to the Opera House

San Francisco Opera’s new season will be a transitional year, temporarily offering a reduction in the number of operas and performances to ensure a safe return to the stage. Rehearsals and performances for the three fall productions are scheduled in succession rather than overlapping as in a typical repertory season. This provision, along with other protocols, allows maximum flexibility as the Company and audiences navigate this early period of emergence from the pandemic shutdown. The summer of 2022 will bring the return of repertory presentations.

Based on the latest medical advice and patron feedback, San Francisco Opera will now require proof of vaccination for all patrons ages 12 and up to attend performances at the War Memorial Opera House and the Diane B. Wilsey Center for Opera during the 2021–22 Season.

Masks must be worn inside the building at all times.

The Company is no longer able to allow entry to patrons with only a negative COVID test.

To ensure the health and safety of audiences, artists and employees, comprehensive front and back-of-house safety protocols—developed in partnership with a team of University of California, San Francisco (UCSF) physicians led by epidemiologist Dr. George Rutherford—will be in place.

For tickets and programs for the season, and many events that are taking place online, off-site, including at the Ballpark: