Books I Love: Two Essential New Books on Versailles to Collect for a Lifetime of Pleasure and Inspiration

This week, I invite you to take a closer look at ‘Fashion and Versailles’ by Laurence Benaïm (published this month by Flammarion) a superbly illustrated book that traces two centuries of style and design influence from the courts of Versailles.

And let’s inspect ‘Versailles A Private Invitation’ which at 320 pages is an impressive book, indeed. It’s endlessly fascinating—with rooms and furniture up-close, and dazzling details of art, gardens, vistas and architecture. 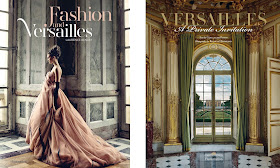 The palace of Versailles—a hub of power and seduction, and the most legendary royal residence of all—is undisputedly the birthplace of fashion, for both men and women.

The world’s first dress codes were established at Versailles under Louis XIV. Entwined with the whims and humors of queens and royal mistresses—from Madame de Montespan’s “innocent″ dress that was adept at concealing pregnancies, to Marie Antoinette’s extravagant wigs, to bejeweled courtesan slippers—the world’s eyes stayed riveted on fashion trends as they evolved at the French château.


Why I admire ‘Fashion and Versailles’

A selection of images from historical documents, fashion house archives, and the latest runway shows and fashion exhibitions accompanies the excellent text.

The spirit of Versailles continues to thrive in contemporary fashion inspiring passions and vocations in a new generation.

“Versailles is where fashion finds new beginnings, always, etche in the footsteps of the lovely ghosts that spark the dreams of couturiers,” says Catherine Pégard in her introduction.

This book brings together cultural and social history and fashion at their very best all set against the dramatic background of the most spectacular palace in the world.

A must for Francophiles.


About the Author, Laurence Benaïm

A fashion expert, she has published many books, including Women in Dior: Portraits of Elegance (Rizzoli, 2016), Lancel: Parisian Maison since 1876 (Flammarion, 2016), and Christian Dior in the South of France: The Château de la Colle Noire (Rizzoli, 2017). She is the editorial advisor for Almaviva, the lifestyle supplement of the French newspaper Le Figaro.

The largest château in the world has been a source of interest and amazement and inexhaustible beauty since the reign of Louis XIV.

A portion of the palace and its grounds has remained inaccessible to the public.‘Versailles A Private Invitation’ takes the reader through unknown and unseen and recently refurbished regions of the famous palace and its gardens on a private tour, noting each detail.

Photographer Francis Hammond was given carte blanche to the entire property and this volume includes previously unseen images of the newly restored Cabinet de la Meridienne, Marie Antoinette’s boudoir, and the Salon d’Aurore, as well as rare objects that are not on public display. He has detailed them superbly.

From the Royal Opera to the Grand Trianon, and the Orangerie to the Queen’s Hamlet, this volume features hundreds of photographs of the entire domain. Close-ups of ornamentation and artwork are also included, drawing attention to artistry in such details such as exterior walls, door bolts, ceilings, parquet, carving, fabrics, marquetry, and more.

By examining the history of the palace, the history of France is also explored. The secrets of the royal families who lived in the palace and the mysteries of the great nation are revealed in quotations from true accounts of life at the palace in the eighteenth century, extracts from Marie Antoinette’s personal letters, historical memoirs, and references to the château in classical literature.

The text is multi-layered and full of details that will enrich a later visit to Versailles.


About the Author and Photographer

Guillaume Picon is a historian and specialist on the kings of France. He is the author of A Day at Château de Fontainebleau (Flammarion, 2015). Francis Hammond’s photographs have been published in A Day with Claude Monet in Giverny (2017), Empire Style (2016), Private Houses of France (2014), and Historic Houses of Paris (2010), all published by Flammarion.

By Laurence Benaïm
Foreword by Catherine Pégard
Published by Flammarion

By Guillaume Picon
Photography by Francis Hammond
Published by Flammarion